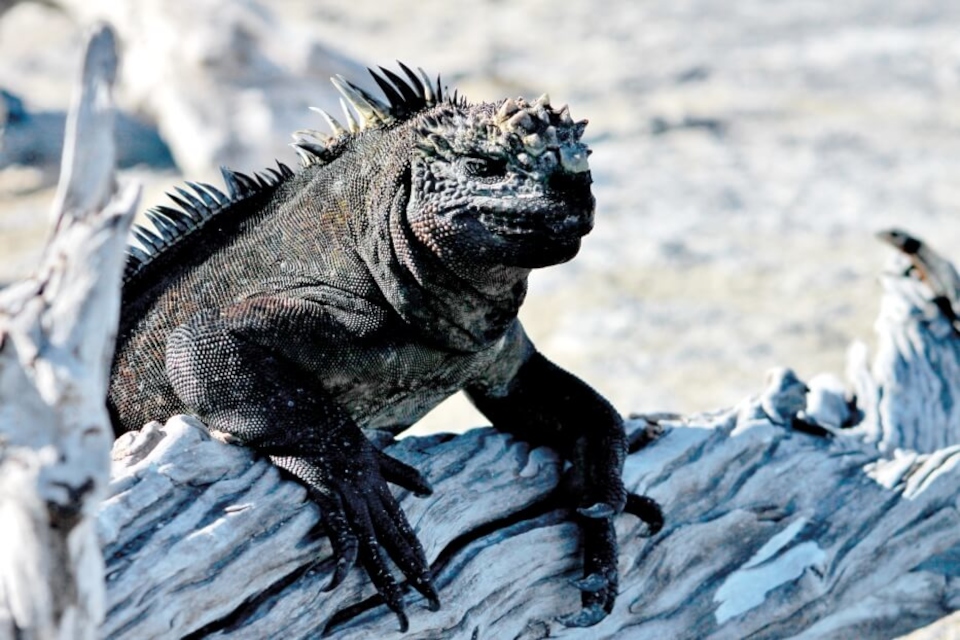 Boy: “Well these ones can.”

Dr. Stephen Maturin: “My God, two new species in as many minutes…”

Galapagos marine iguanas – they’re dark, bold and look like miniature Godzillas that crawl around on their bellies. They’re also seen practically everywhere throughout the Galapagos archipelago. But what is it that makes them such a unique creature in their own right, exactly? Find out in this blog, where we detail just what it is exactly that makes marine iguanas a must-see and a part of our BIG15 group of iconic species in Galapagos.

What are Galapagos marine iguanas famous for?

Galapagos marine iguanas are believed to have diverged from their land-based cousins around 5.7 million years ago. The adaptations they have grown since diverging are what makes them so remarkable.

Galapagos marine iguanas are famed for being the only marine lizard in the whole world. In addition to this, their eating habits while underwater are another remarkable feature of theirs, as these aquatic iguanas feast extensively on the algae that grows atop submerged rocks.

A distinct physical characteristic of these is found in their:

Color: As black as charcoal and the lava rock they walk across and amass over. Their dark scales also absorb much of the sun’s heat for their cold-blooded bodies and also have the remarkable ability to change colors during mating season.

Tail: They have laterally flattened tails to help them swim and steer their bodies when in the water.

Snout: Flatter snouts with protruding teeth that are tricuspid, allowing them to get these sharp shears next to the rocks and tear away the tenacious algae that sticks to them with relative ease.

As a result of their subaquatic behavior, Galapagos marine iguanas have evolved to have a desalination gland that’s located right behind their nose. This is used to expel the salt from their bodies in an unmistakable manner – often making look as if they’re sneezing or even hissing at you.

“Shrink only in case of emergency” Adaptability

Unlike the feathered creatures that soar overhead in Galapagos, marine iguanas can’t simply fly away from their harsh environment should they be confronted with tough times (in terms of nutrients and food). For Galapagos marine iguanas, it’s a matter of adapt or die. As a result, these incredible reptiles can actually shrink their bodies so as to be less dependent on larger quantities of food. It’s a fascinating characteristic that allows them to improve their survival odds and pass their genes on to the next generation.

Where are Galapagos marine iguanas found?

Galapagos marine iguanas are located on the main islands of Galapagos Guests will often see them hanging out along the multitude of shorelines in Galapagos. Some of these main islands can even be accessed aboard our Sea Lion Yacht.

Interested in experiencing this mesmerizing and fascinating iconic species during your trip to Galapagos? Look no further than the Finch Bay Galapagos Hotel to see them hanging out around the numerous beaches in Puerto Ayora, including our beachfront slice of paradise – Playa de Los Alemanes!

previousStargazing in the Galapagos: Marvel at the Finch Bay’s night sky!

nextOscar-winning Director Luc Jacquet sits down with us at the Finch Bay Galapagos Hotel!