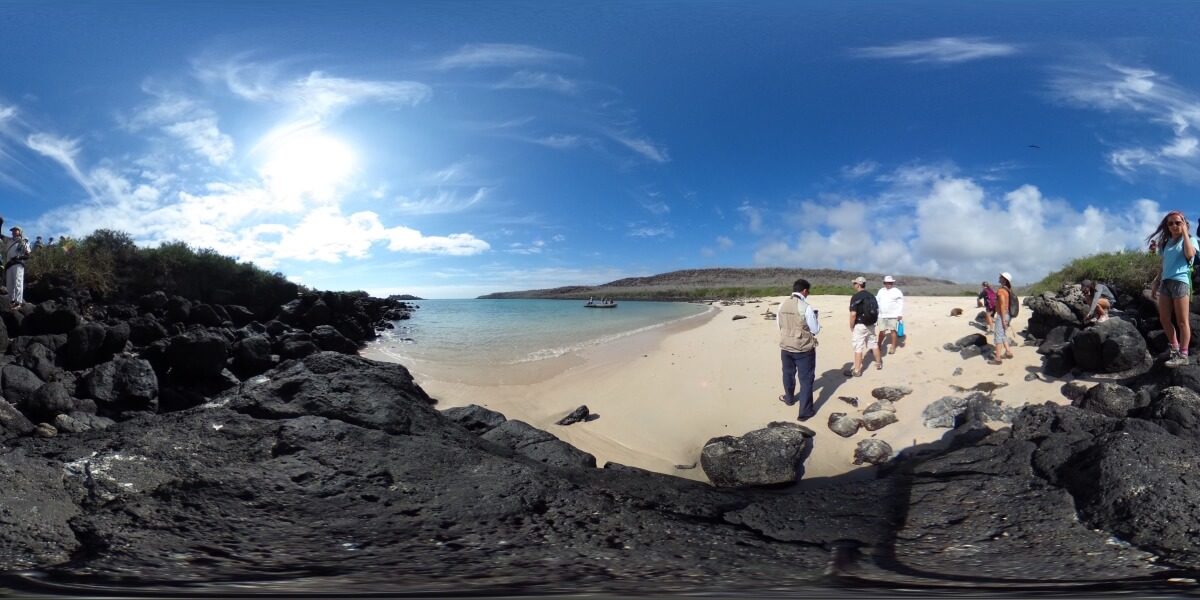 Santa Cruz is the perfect base from which to explore some of the Galapagos’ most beautiful and unique islands. Be it either through a Galapagos cruise or a land-based option, Santa Fe Island is a sweet, little gem that lovers of both flora and fauna will come to enjoy all the same. If a land-based option is what you are after – maybe because you want to be able to manage your own agenda and have a taste of the island life – staying at Santa Cruz’s only beach-front hotel is probably the best way to go. The Finch Bay Galapagos Hotel has options for pretty much every taste and offers packages that will make everyone’s Galapagos adventure a unique experience. Be it relaxation, adventure, exploration, sports, gastronomy, intimacy, or island life, Finch Bay has it all. If time allows it and you are looking to explore beyond the island of Santa Cruz to get a more comprehensive Galapagos experience, you can get a taste of a true luxury yacht trip without having to go too far. Ask at the Reception about the hotel’s Sea Lion exclusive vessel, and visit Santa Fe Island by Yacht!

The Oldest Island in the Archipelago

Studies suggest that Santa Fe Island is in fact the oldest ones in the whole archipelago, mainly because of the underwater rock formations that date back approximately 4 million years. Its relatively flat surface. which was caused by uplifting, is home to two endemic wildlife species – the Santa Fe land iguana and the Santa Fe rice rat – and the largest species of opuntia cacti. But these are not the only species you will be able to observe at this relatively small (24 km2 / 9.3 mi2) but packed island! So have your camera ready, and check these iconic Galapagos species off of your Big15 list: the Galapagos hawk (the islands’ top predator), the blue-footed booby, the Galapagos sea lion, the frigatebird (great and magnificent), the marine iguana and the Nazca booby.

This Galapagos BIG15 species that is endemic to Santa Fe can only be found on this island, which is a good reason for putting it on your Galapagos list of must-see things. This species differs from its cousin, the Galapagos land iguana, due to its smaller dorsal spines, slightly browner color, and tapered snout. Unlike its lighter-colored cousin, the Santa Fe land iguana’s brown shade makes for a useful adaptation tool, as it blends perfectly with its surroundings, which in turn makes it harder to be spotted by potential predators. Its diet consists mainly of the prickly pear that grows on the island’s Opuntia cactus. And as the iguana feeds on its favorite fruit, Darwin’s finches feed on the parasites that are sometimes found on the reptiles’ scales. Ever since the eradication of the feral goat in the year 1971, the Santa Fe land iguana’s population starting recovering, but it’s still considered a vulnerable species due to its limited distribution on just one island. Nowadays, the Santa Fe land iguana population is estimated to have approximately 7,000 individuals.

Visit Santa Fe Island by Yacht and Return to your Home Over in Santa Cruz!

After an adventurous trek to observe the islands’ unique land iguana, bask under the sun with its Galapagos sea lion colony at one of the most beautiful coves in the archipelago. Swim and snorkel around in the surrounding turquoise waters before heading back to the Sea Lion yacht and navigating back to your home in the Galapagos – the Finch Bay Galapagos Hotel. Oh, and did we mention that an out-of-this-world cocktail and gourmet meal would be waiting for you when you get back?

Now that is a true Galapagos experience!