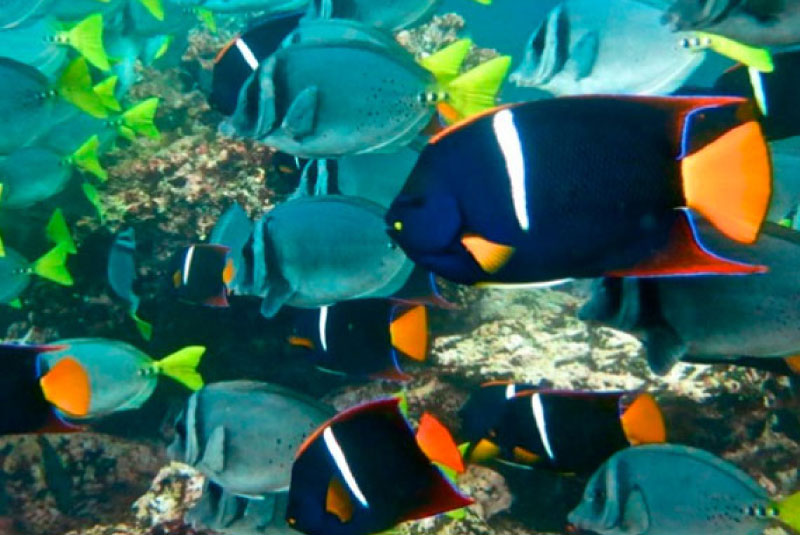 The Galapagos Archipelago is celebrated worldwide for its unique plant and animal species; however, the miraculous marine life that surrounds these islands is often overlooked. The processes that have so enthralled the scientific community since the arrival of the H.S. Beagle are also clearly represented in those species that live below the ocean waves, not just in those above. Around 3,000 marine species call these waters home, of which over 20% are endemic to the Galapagos marine reserve, including around 400 are fish species alone. Just sticking your head below the ocean surface, an equally fantastic and stunning world can be found. Unfortunately, studies have found that rising temperatures and acidity levels in the ocean are threatening the marine biosphere, starting first and foremost with coral reefs.

Why is the Galapagos Marine Reserve so diverse?

The beauty and richness of the Galapagos Marine Reserve are foremost due to the archipelago’s location at the conjunction of at least three major ocean currents, joining warm northern waters with rich arctic waters and deep cold waters from the west. As a result, a unique array of life comes together resulting in an extraordinarily high level of endemism. Endemism is much rarer among marine life than terrestrial species, as marine species are more prone to long migrations and intermingling. The multitude of life is only strengthened by the diverse marine habitats located below the stunning turquoise waters, including vertical walls, coral reefs, rocky bottoms, sandy beaches, and mangrove forests.

After decades of warnings from the scientific community, the world is beginning to suffer the initial effects of climate change. Reports demonstrate that the global temperature has increased 0.7°C since pre-industrial times, the effect of which is being felt by marine species from the equatorial tropics to the deep poles. Rising ocean levels, water temperature, and water acidity all present potentially threating situations for our oceans.

Some of the most essential organisms affected by increasing ocean temperatures are plankton and algae which, although they may seem irrelevant, are the veritable foundation of the marine food chain and are hugely important to a healthy marine environment, especially coral. If ocean temperatures rise by just one degree Celsius for as little as four weeks, coral expels the algae they contain in response to heat stress through a process known as coral bleaching. Algae are the primary food producer for coral and provide up to 90 percent of the energy corals need to reproduce and grow. Without algae, coral slowly appears to become transparent, revealing its white skeleton. If water conditions do not return to normal, coral is not able to regain the algae and will literally starve. Coral bleaching has become dangerously widespread in recent years, and the Galapagos Islands are not an exception.

Galapagos coral and its global significance

The Galapagos Islands are not typically known for their coral reefs, and indeed it was not until the 1970’s that scientists realized the Galapagos Marine Reserve contained coral; nevertheless, they play a very important role in determining the potential effects of climate change on reefs around the world. The unusual current patterns present in the archipelago and its isolation from human activity makes it the perfect ‘living laboratory’ for studying these effects. The Living Oceans Foundation has been conducting extensive research in the archipelago with the support of the University of Miami in an effort to evaluate how coral in the Galapagos is able to recover from strong El Niño events, as well as the impact that ocean acidification may have on the coral.

The future of coral

During the El Niño events of 1982-83 and 1997-98, a large part of the coral in the Galapagos died due to extremely high water temperatures. Only one reef truly recovered, which is located by the northernmost island in the Galapagos, Darwin Island. The coral reefs that survived were studied and compared to those that did not in order to understand the conditions that made coral more susceptible. Unfortunately, the results do not bode well for the future of coral reefs; however, as some coral is more thermotolerant than others, there is still hope. Furthermore, the study determined that distinct Symbiodinium species (unicellular organisms) cause certain kinds of coral to respond differently to bleaching; therefore, if a coral is able to host multiple symbiont types, it will be better equipped to cope with warming waters. One reason the northern coral survived was due to lower levels of acidity in that area (as a result of differing ocean currents), determining that reefs in the Galapagos are unable to survive if the water has a pH of 8.0 or less. Furthermore, after carrying out several lab studies, it was determined that the coral that died had weaker skeletons as a result of increased levels of phosphate in the water due to nutrient-rich upwellings; the increase in nutrients caused the coral to grow faster, forming less robust skeletons. The study thus found that those corals in highly acidic waters and exposed to higher levels of nutrients would be least resistant to the effects of climate change.

nextGalapagos Finches – The Key to Evolution