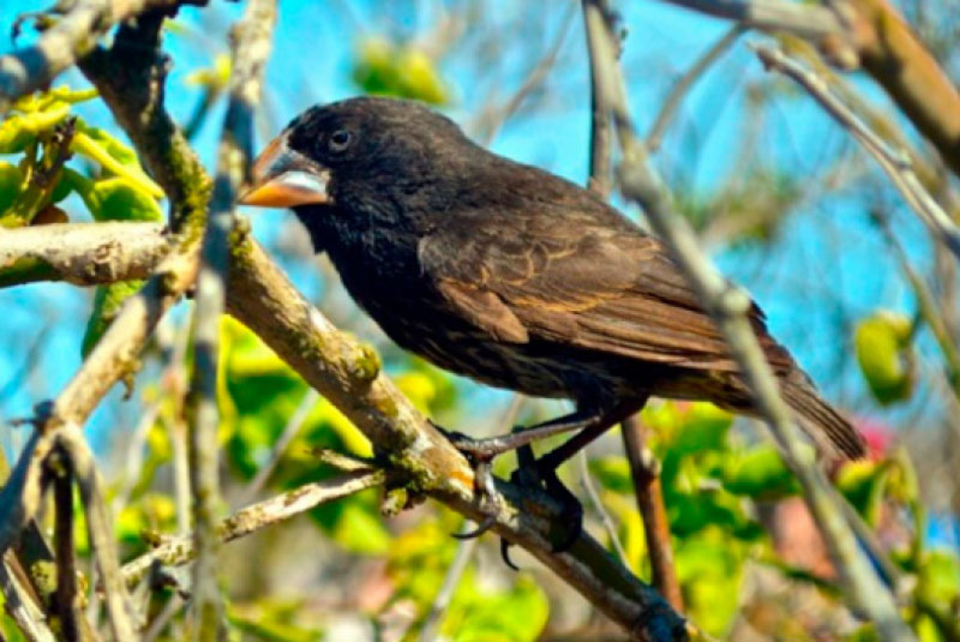 In comparison to the remarkable underwater scenes and towering cacti forests that stretch across the Galapagos Islands, the dull little bird that pecks its way around the archipelago is really quite unremarkable in appearance; nevertheless, this bird has played an extremely important role in society’s understanding of evolution and man’s position in the world. Galapagos finches, also known as Darwin Finches, are a key piece of Darwin’s theory of evolution by natural selection and are one of the most iconic animals in the Galapagos Archipelago.

There are very few physical differences between the 13 or 14 species of Darwin Finch, a reminder of the birds’ common origin. In general, the birds have small rounded wings and short tails and are covered in either a dull black, olive or brown plumage. Neither can the color of their beak help differentiate species from each other, as all Galapagos finches in their non-breeding stage have yellow/orange beaks, and those of breeding age have deep black beaks. However, the key to their differences lies principally in their beaks, more specifically their size and shape, which varies according to the specific niche in which the bird lives.

At first Charles Darwin took little notice of the Galapagos finches, which are very similar in appearance to the common garden finch. In fact, it was not until he began to study his collections (with help from specialists) back in England that he realized all 13 species were related. Upon further study, he recognized that these birds are endemic to the islands and that each species displays only slight variations as if the “species had been taken and modified for different ends.”

The modern understanding of evolution, which is heavily influenced by Darwin, is based on the idea that a new species evolves when one population is divided into two or more. The now separated populations undergo distinct natural selection pressures as a result, and consequently different evolutionary processes, resulting in a new species. Galapagos finches are an exceptional example of this process.

There are 13 or 14 species of Darwin finch, and each one evolved from the same ancestor that arrived to the archipelago only a few million years ago. Because the finches have only had a relatively short amount of time to evolve, they are strikingly similar and experts have yet to determine one method of classifying the birds. In general, the finches can be divided into tree-dwelling seed eaters and tree-dwelling insect eaters (Tree Finch), ground-dwelling seed eaters (Ground Finch) and the cactus-dwelling seed eaters (Cactus Finch), but there are a few that cannot be sorted into any of these categories, such as the Warbler Finch and the Woodpecker Finch.

The variations that exist between finch populations (beak, behavior, etc.) are a result of natural selection. In this process, random and ever so slight differences occur between individuals, which produce either unfavorable or favorable results for the individual and may potentially determine the reproductive success of the individual. If the trait is successful, it will be passed on to future generations, and over time proliferate throughout the population. All of the finches in the archipelago evolved from a seed-eating, ground-dwelling finch, but over time as populations were divided and faced different habitats and circumstances, they evolved to favor that circumstance. 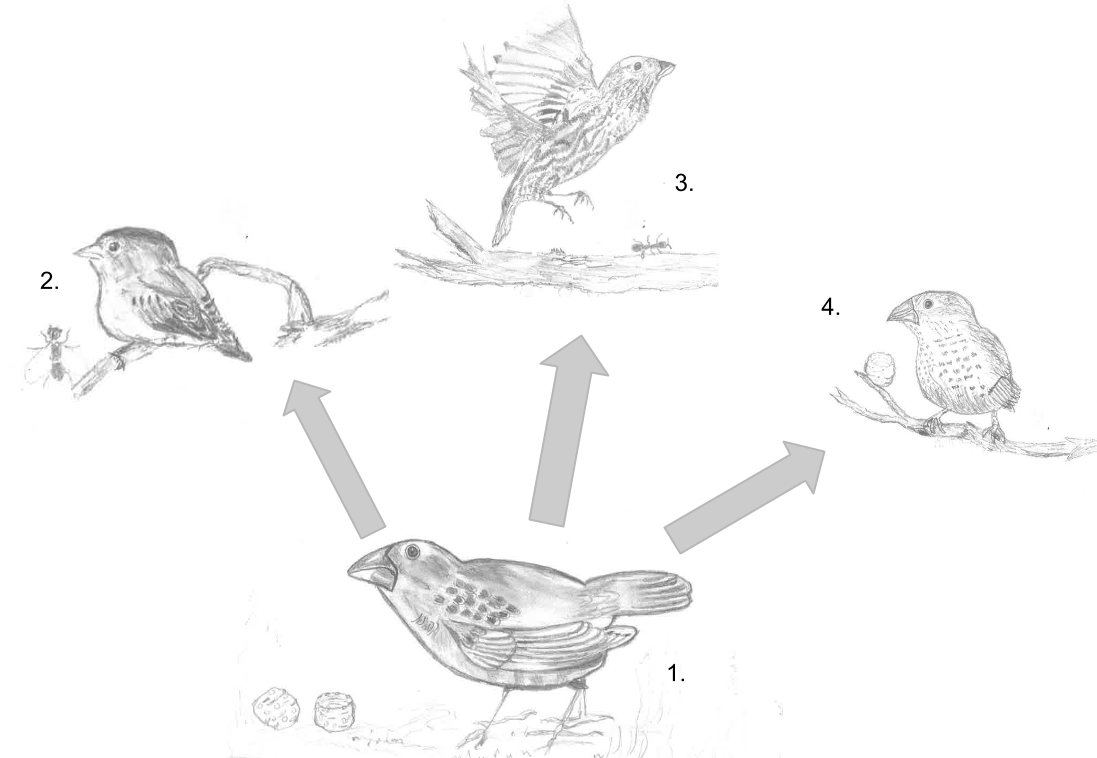 Geospiza magnirostris (1) adapted into three other species of finches that are found in the Galapagos Islands. Photo Credits: Jackie Malvin via Wikimedia Commons.

Extensive research has been carried out on finch populations in the Galapagos Islands, but two works of literature stand out in particular. Ecology and Evolution of Darwin’s Finches by Dr. Peter R. Grant is an excellent read and helps in understanding the importance and complexity of natural selection. His most recent work, How and Why Species Multiply: The Radiation of Darwin’s Finches is also a masterpiece. The second, The Beak of the Finch by Jonathan Weiner, has won the Pulitzer Prize and provides a clear explanation of natural selection. They may be easily located at Powell Books, Barnes & Noble and Amazon.

nextAll About the Galapagos Islands Tortoises