Let’s answer this question by taking a look at the many options to explore the Islands. Below we’ll provide you with a very brief introduction to the Galapagos Islands, and then discuss options for land-based experiences, sea-based expeditions, and the best option overall: the award-winning Finch Bay Galapagos Hotel.

Introduction to the Galapagos Islands

As the world is inching its way toward the “new normal,” which looks more and more like the “old normal”, the enchanting Galapagos Islands and their people have opened their arms to welcome us back. For more specific in-depth information about the Islands, their wildlife, and the activities you can enjoy, please check out some of our other blog articles. In general, the diversity of wildlife in this archipelago is spread out across its eighteen main islands, three smaller islands, and 107 rocks and islets, which are among the most beautiful land formations in the world. Together with the crystalline blue waters, they will make for the most picturesque photos you will ever take! The wildlife itself has also been the subject of countless nature magazine covers and films. From the world-famous blue-footed boobies and their adorable courtship dance to the playful sea lion pups and the majestic but non-threatening Galapagos sharks, there is an immeasurable amount to see as each island has its own native and endemic species. Quite literally, no two islands are the same. There are so many activities to do to help us get closer to these amazing creatures and their beautiful homes,  including guided photography walks, snorkeling with a staggering array of colorful fish, and other marine life or trips along the rugged shorelines of the islands on a paddleboard or in a zodiac. There is never a shortage of things to do!

Of all of those islands mentioned, only four are actually inhabited by humans. One, Floreana, is a fishing village of only about 100 people, and it’s not really a tourist attraction. The other three, Santa Cruz, San Cristobal and Isabela, are set up for tourism as well as serving as a fully functioning community for its residents.

Santa Cruz is the most populated island with approximately 20,000 inhabitants and is considered the financial center of the Islands. There is plenty to do and see here, including a visit to the renowned Charles Darwin Research Station. For a small donation, you can see scientists working to repopulate the tortoises of the other islands. There is even an exhibit of the world-famous Lonesome George and a complete whale skeleton! There are some farms within a 40-minute car/bus ride that you can visit that have dozens of the Santa Cruz giant tortoises roaming around freely. Santa Cruz is also home to the top-ranked Galapagos Islands Lodge: the Finch Bay Hotel, one of the archipelago’s only beachfront Galapagos hotels. There are other hotels on the island from all different categories and price ranges, but there’s no doubt that the Finch Bay Hotel is your best option. Getting to Santa Cruz is fairly easy since there is an airport with flights to and from Mainland Ecuador lying on the northern edge of the island. Traveling from Santa Cruz to the other populated Islands is also fairly easy as Isabela is a two-and-a-half-hour boat ride to the west and San Cristobal is two hours to the east. There are also multiple daily excursions offered by dozens of tour operators. Interestingly enough, the Finch Bay Hotel has its own 20-passenger yacht, the Sea Lion, that offers multiple  daily excursions to several fascinating destinations.

Lying on the western edge of the archipelago, Isabela is the largest island in the Galapagos. When looking at a map, it actually looks like a giant seahorse. With a population of close to 2,000 inhabitants, it is the third most populated island in the archipelago. Puerto Villamil is a very small town, so the options of places to stay there are somewhat limited. Most of the hotels seem to be on the opposite sides of the price spectrum as either cheap or expensive with not much to choose from in the middle. Isabela was actually formed by six shield volcanoes merging together, five of which are still active, making it one of the most active volcanic areas on earth. Isabela’s abundant bird, animal and marine life is staggering, and the island is home to more wild tortoises than anywhere else in the islands. Other notable species you might see include penguins, marine iguanas, Galapagos land iguanas, boobies, Galapagos hawks and many, many more. The west coast of Isabela in the Bolivar Channel is the best place in Galapagos if you’re interested in spotting whales and dolphins.

Despite its smaller population, San Cristobal is noted for being the political center of the Province of Galapagos. Like Santa Cruz, the island of San Cristobal has an airport that offering daily flights to and from mainland Ecuador. However, its position on the eastern-most edge of the archipelago makes it a little difficult to travel to the other islands. Most of its approximately 8,000 residents work in the government or in tourism or fishing. Popular sites near the town of Puerto Baquerizo Moreno include the Cerro Tijeretas, a nesting colony for frigate birds, and a statue of Charles Darwin on the original site where he first landed in the Galápagos Islands. La Loberia, a colony of sea lions, is about ten minutes by bus from the town. Local boat tours also take visitors to two popular nearby sites. One of the most iconic land formations in the Galapagos, “Kicker Rock,” is the remains of a lava cone that is now split in two. Isla Lobos (“Sea Lion Island”) is also a nesting site for blue-footed boobies. The selection of Galapagos Islands lodges on San Cristobal is more varied than on Isabela, but not as much as on Santa Cruz.

Staying on land is not the only way to experience these awe-inspiring islands. Of course, a sea-based expedition might be on your bucket list, and there are quite a few options. Several years ago, the Galapagos National Park Service noticed that there was an increasing number of tourists coming to the Islands, so they implemented regulations to protect this precious ecosystem. While limiting the number of vessels and tourists that can visit any one site, they included most of the islands as part of the Galapagos National Park sea-based excursions.

The Galapagos National park encompasses 97% of all of the land in the territory, including all of the area not inhabited by humans in the archipelago.

Many tour operators, including Metropolitan Touring, offer Expedition Cruises with 3-day, 5-day and 7-day options. Metropolitan Touring owns and operates three such expedition vessels: the Santa Cruz II, the Isabela II and La Pinta. Each one offers different passenger capacities, numbers of crewmembers, as well as the length of the cruise itself. What these three vessels have in common is that they are operated by experienced and knowledgeable captains, deck officers, helmsmen, seamen, Chief Engineers, machinists and zodiac drivers who make sure that each and every person on board is completely safe and secure during the cruise. The hotel departments of all three are led by confident and experienced Hotel Managers and their eager-to-please staffs of chefs, stewards, waiters, dishwashers and bartenders who make sure each of your requests and desires are met. Each vessel also counts on an experienced Expedition Leader and their thoroughly-trained and fully knowledgeable staff of Certified Naturalist Guides who will answer every question you may have about the flora, fauna, geological history, and human history about the Islands as well as topics like photography, oceanography and astronomy.

If you can’t spend an entire week onboard a ship but still want to travel to other locations, local operators on all three of the islands also offer day cruises to the nearby islands, rocks and islets. One major difference is that the Finch Bay Hotel, a beachfront Galapagos hotel, has its own comfortable and spacious 20-passenger yacht, the Sea Lion, with its attentive and welcoming staff, and different activities on each daily itinerary to enjoy the nearby attractions. 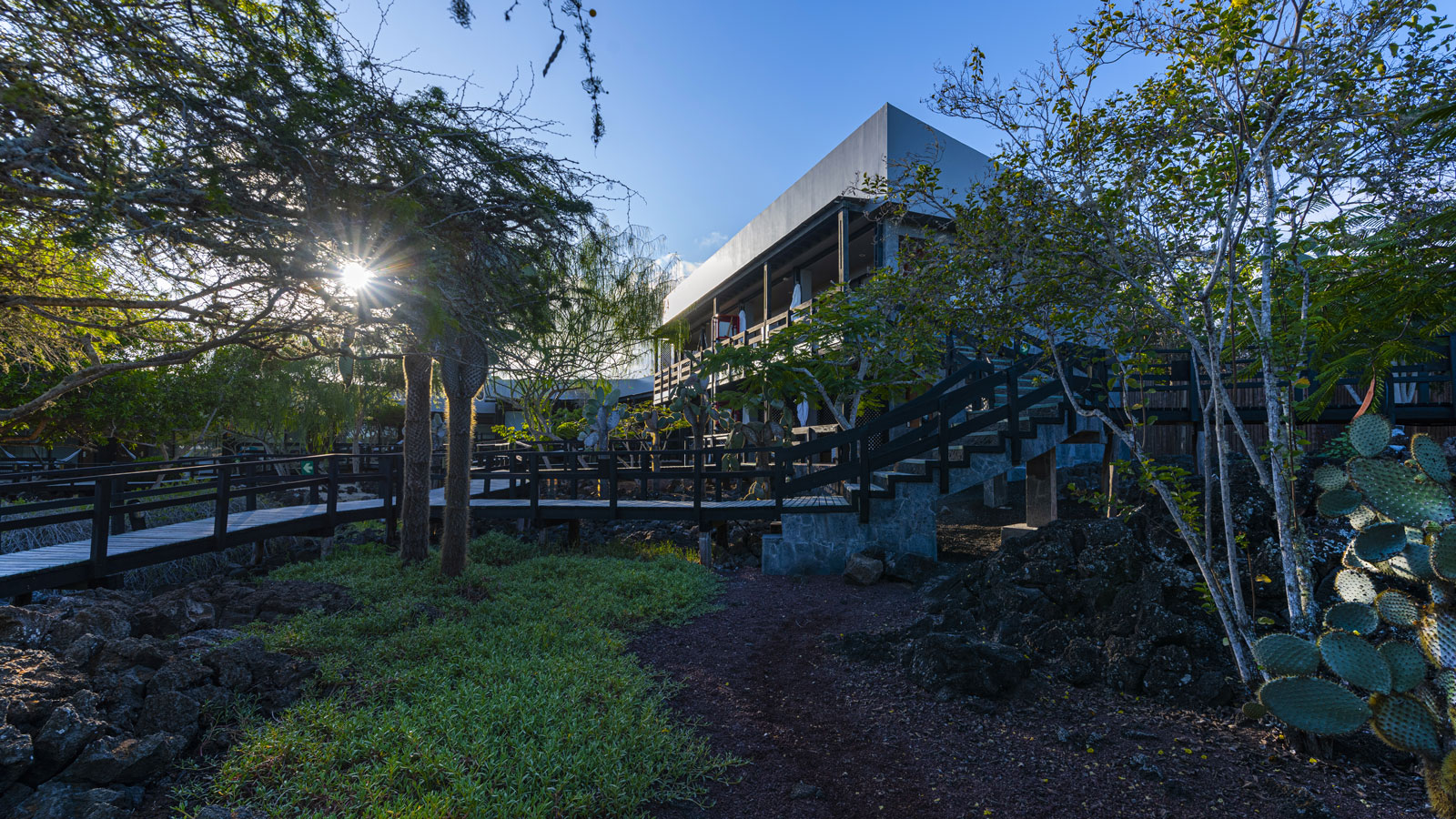 Santa Cruz Island: Land and Sea—The Best of Both Worlds

Santa Cruz really offers the best of both worlds.  The crown jewel of this particular piece of Paradise is the Finch Bay Galapagos Hotel. The Finch Bay has, without a doubt, the most ideal location of all hotels in the archipelago. Nestled on the island’s southern shores, this award-winning resort is just off Academy Bay, which is filled with colorful sailboats at anchor there. The Finch Bay, as the archipelago’s only beachfront Galapagos hotel, is right on Playa de los Alemanes, which can provide hours of sandcastle-building, tanning, and snorkeling for kids and adults of all ages. From here, you can enjoy a wide variety of fun-filled activities, such as Day Tours, including the daily excursions that you can take aboard the Sea Lion Yacht and the trips you can take to the island’s highlands to observe the Santa Cruz Giant Tortoises in their natural habitat. There are also day hikes you can take to some other stunning white-sand beaches, like Tortuga Bay, or if an adventurous option is more your taste, teenagers and young adults have an exciting option back at the hotel. By simply walking past the beach, you can reach a strikingly beautiful volcanic fissure that found its way to the ocean. Known as Las Grietas, this spectacular site is an amazing place to take a dip and marvel at its rock formations and tropical fish. Back at the hotel, fine cuisine can be enjoyed with indoor and outdoor dining options to savor succulent local and international dishes. A children’s menu is available as well as dishes specifically prepared to take dietary needs into account. Other extras include a tour of the hotel’s organic garden, known as Chakrita, and Ceviche cooking classes. Aside from the amazing food, other amenities offered by the Finch Bay Galapagos Hotel include the pool area and the Spa. The Spa offers an exercise room with all the necessary equipment for a nice workout. A massage or any of the other treatments, including a relaxing soak in a hot tub, can be an amazing way to recharge the batteries after a day of hiking through gorgeous otherworldly landscapes. The pool area also has a lot to offer besides a refreshing dip, including comfortable lounge chairs to catch some rays or read a good book. If a delicious cocktail and unique freshly prepared snacks is what you’re looking for, there is a well-stocked and well-served poolside bar. 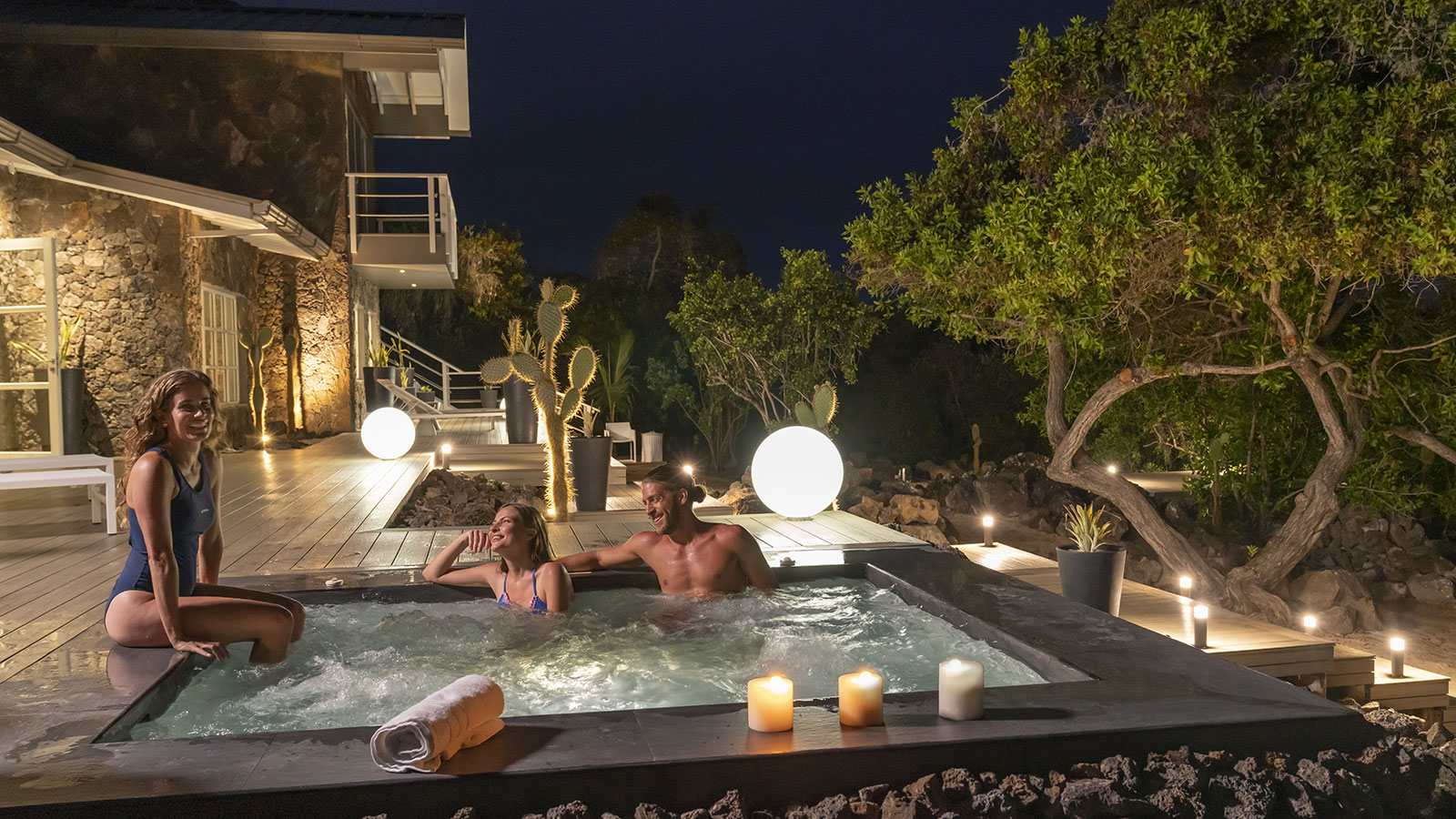 In conclusion, the Finch Bay Galapagos Hotel is the best option for a vacation that offers daily tours of Galapagos National Park, with the flexibility of choosing land and sea alternatives. A trip to the Galapagos without visiting the National Park is just not worth it. The hotel itself has an Expedition leader on staff to organize all of your activities. Let’s not forget that one of the recognitions this world-class resort has received is being one of the most Eco-friendly hotels in Latin America in order to protect this UNESCO World Heritage site. With everything it offers, you can do it all!

previousHow to experience the Galapagos islands: land or sea?