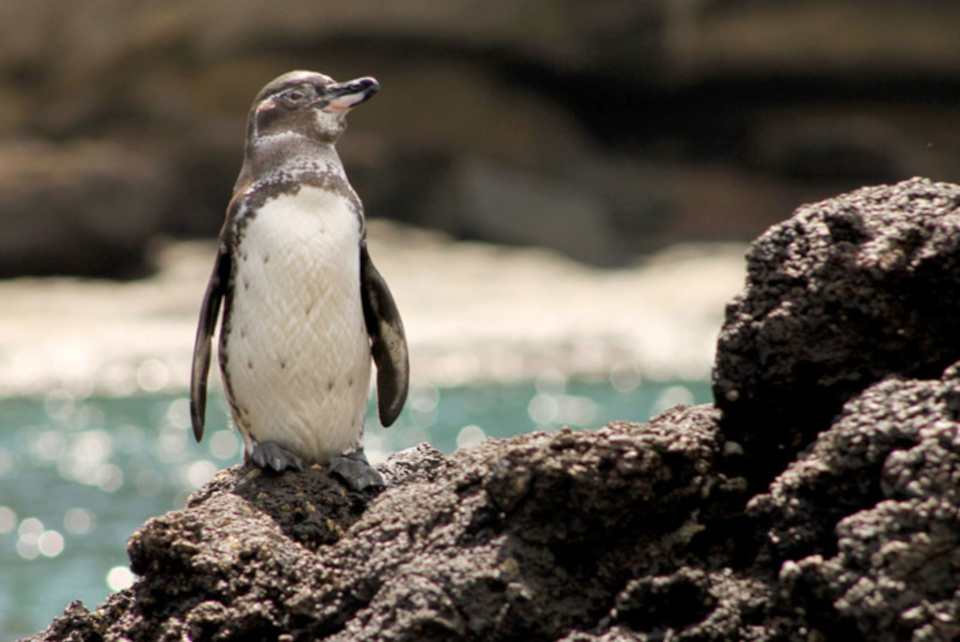 The World celebrated Penguin Day this Tuesday 25th of April. The date of this celebration is meant to coincide with the northward migration of penguins, but there’s one small catch – the rarest of species of penguin aren’t migratory. Yes, in the Galapagos Islands, penguins are an exception to the rule. Then again, what in the Galapagos archipelago is not an exception to the rule? Being the most tropical species of the family, penguins in the Galapagos suffer risks of their own. This day is the perfect occasion to think about what we can do to help out these little guys!

Evolution at its Finest

The Galapagos penguin Spheniscus mendiculus is an amazing creature. Talk about a challenge for evolution! Imagine having to adapt to extremely warm temperatures and humidity levels, just like those found in the Galapagos Islands, when your physiology is meant to cope with the South Pole. These little creatures are a true example of how evolution works!

Galapagos penguins found a niche in this strange environment by gradually and resiliently changing a few of their characteristics. With time, the penguin began decreasing in size until it became one of the smaller forms of its species. Being smaller in size would make it easier for them to keep cool under the scorching equatorial sun. They also started growing fewer feathers to the point of having patches of bare skin visible (this was a more effective way of staying cool under the sun’s heat). Sometimes people will also notice Galapagos penguins hunching forwards. This pose helps them cast a shadow over their feet, protecting their little claws from extreme sunlight. They are also commonly seen stretching their flippers in order to catch a hint of the cool sea breeze.

Even if the Galapagos Islands seem like the ideal place to thrive (for those of us who dislike cold weather, at least), they are actually a harsh environment. Hot and dry seasons change the scenery from intense green to a monotonous grey. Mating patterns are not seasonal like they are in other regions of the world, but are opportunistic instead. This means most animals, like Galapagos penguins, mate when the conditions are most favorable and many times these depend on ocean currents. Colder currents bring more nutrients and small fish. Mating mode is on!

Why are they endangered?

This endangered species has an estimated population of just 1,200 individuals. Because of their small numbers, they are constantly at risk and their main threat is – to no one’s surprise- us! The impact that human activity has had on the world is undeniable and its direct connection to climate change is felt in every corner of the planet. Because they are only found on two spots of the archipelago, Isabela, and Fernandina, one single event could be catastrophic. Their survival not only depends on invasive species and human activity being kept away from their breeding areas but also on weather patterns. As an example, after the 1982 El Niño, 77% of the population was lost, and 66% of the remaining group perished after the 1997 El Niño. If weather disruptions like El Niño happen with more frequency and harshness, it could make it harder for the species to recover. Life is not easy for a penguin in the Galapagos!

Take the chance to meet them personally!

Our everyday actions affect the world around us. It might seem like an exaggeration but all the processes of life are connected in one way or another. At the Finch Bay Galapagos Hotel, we know this, therefore we try to leave as little of an environmental footprint as we possibly can. We want our visitors to fall in love with these amazing islands and appreciate them the way we do. That is why we offer our guests the chance to see some of its rarest species and prettiest visitor sites. If you want the advantage of a luxurious, relaxing vacation on land – but don’t want to miss out on some of the other island’s biggest surprises – we have what you need. With our brand new and innovative Island-2-Island Hopping program, we combine the best of both. Visit Isabela Island, which is one of the only spots where you will be able to observe Galapagos penguins on their natural habitat.

Appreciate their uniqueness, try to understand their difficulties and feel lucky to have been one of the few to have seen a penguin in the Galapagos.

nextGalapagos coffee: a niche that’s waiting to become a part of the Galapagos tourism experience