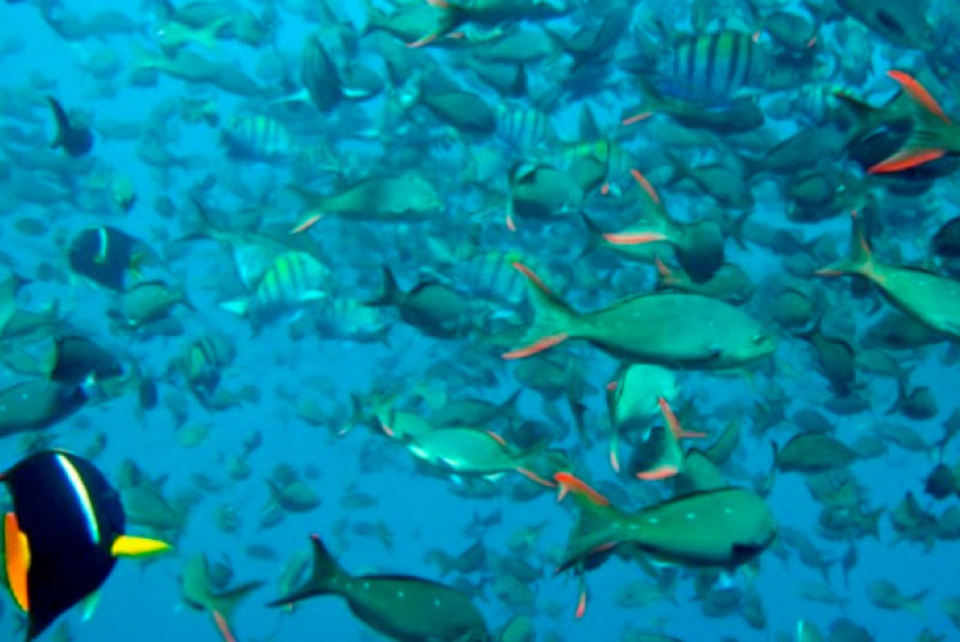 The Galapagos Islands are a direct result of their unique location on the planet. The climate and, consequently, life on the islands are directly influenced by the confluence of warm and cold ocean currents that meet in the archipelago. Charles Darwin himself noted that the unique climate of the Galapagos Islands “seems chiefly caused by the singularly low temperature of the surrounding water, brought here by the great southern polar current (Humboldt Current).” The Galapagos ocean studies indicate that thanks to this confluence the animals like the Galapagos penguin and marine iguana are able to survive on the equator.

Three major ocean currents flow through the Galapagos Archipelago: the Humboldt Current (or the Peru Coastal Current), the Cromwell Current (also known as the Pacific Equatorial Undercurrent); and the Panama Current. These are fed by several other small ocean currents, such as the South Equatorial Current.

The Humboldt Current is one of the primary ocean currents affecting the southern half of the Pacific Ocean. Originating in the waters of Antarctica, it travels north along the edge of South America bringing frigid Antarctic waters to the coast. In addition to this, the Southeast Trade Winds and the Earth’s rotation result in the largest upwelling system in the world. As the winds push away the current’s surface waters, the cold, nutrient-rich waters rush upwards into the Humboldt Current, leaving in its wake the world’s most productive marine ecosystem. Once the Humboldt reaches the equator, it is pushed west where it flows into the South Equatorial Current and throughout the Galapagos. These nutrient-rich waters attract enormous quantities of phytoplankton and algae, forming the basis of the food chain in the Galapagos. It is for this reason that the dry season is known to be good for observing a diverse amount of marine life, although the waters are less clear.

The Cromwell Current, like the Humboldt, is a cold current, falling to just 13°C at its core; however, it originates in the Western Pacific Ocean and its low temperature is due to the fact that it is a subsurface current, moving 300 feet beneath the ocean surface. Upon reaching the Galapagos Platform, this deep current is pushed upwards, spreading throughout the western part of the archipelago and bringing deep, nutrient-rich waters to the shores of the islands. It is an enormous current, measuring 250 miles wide and 3,500 miles long, and therefore represents another extremely important source of nutrients for the islands. This current is responsible for the wide variety of marine life that can be found around the western and central islands, such as bull sharks, king angelfish, Mola Mola, red-lipped batfish and seahorses. Furthermore, the Galapagos penguin is largely dependent on this current for its diet and to avoid overheating.

However, these cool currents not only provide the islands with nutrients but greatly impact the climate itself; in fact, the dry season is essentially dependent on the presence of the Humboldt Current. With the arrival of the Humboldt Current, the temperature of the air is inversed and while air temperature typically decreases with elevation, the cold waters instead cause the air closer to the ground to be cooler than the air above. This effect is known as a temperature inversion. The warmer inversion layer contains a high concentration of moisture droplets that rise from the ocean. However, in some parts of the islands, this layer is obstructed by the highlands and so the moisture condenses. It is for this reason that the highlands are extremely lush, while the lowlands are bone dry. This effect is also responsible for the garua mist that can be seen in the islands from May to December.

Come December when the Northeast Trade winds lose their strength, the presence of the Humboldt in the Galapagos is significantly reduced and is essentially replaced by the Panama Current, which brings warm waters from Central America. According to the Galapagos ocean studies, this current warms water temperatures to about 27°C (in comparison to around 20°C during the dry season), causing the inversion layer to dissipate. As a result, the climate of the Galapagos becomes your more typical equatorial archipelago, with a more tropical, wet climate. However, because the rains come in short, sharp showers, the season is generally characterized by sunny days and blue skies. Furthermore, the waters are significantly clearer due to lower numbers of plankton and algae, making for good snorkeling and scuba diving conditions. Take advantage of our well-designed programs in Galapagos and don’t miss the opportunity to swim under the different currents of the ocean.

Because the currents do not flow past all of the individual islands in the Galapagos Archipelago, the water around each one varies significantly, which affects individual island ecosystems and climates. Consequently, the salinity, temperature, and amount of marine life in the Galapagos ocean differ based on the predominant current flowing past the islands at any given moment.

next10 Reasons to go on your honeymoon at the Galapagos Islands