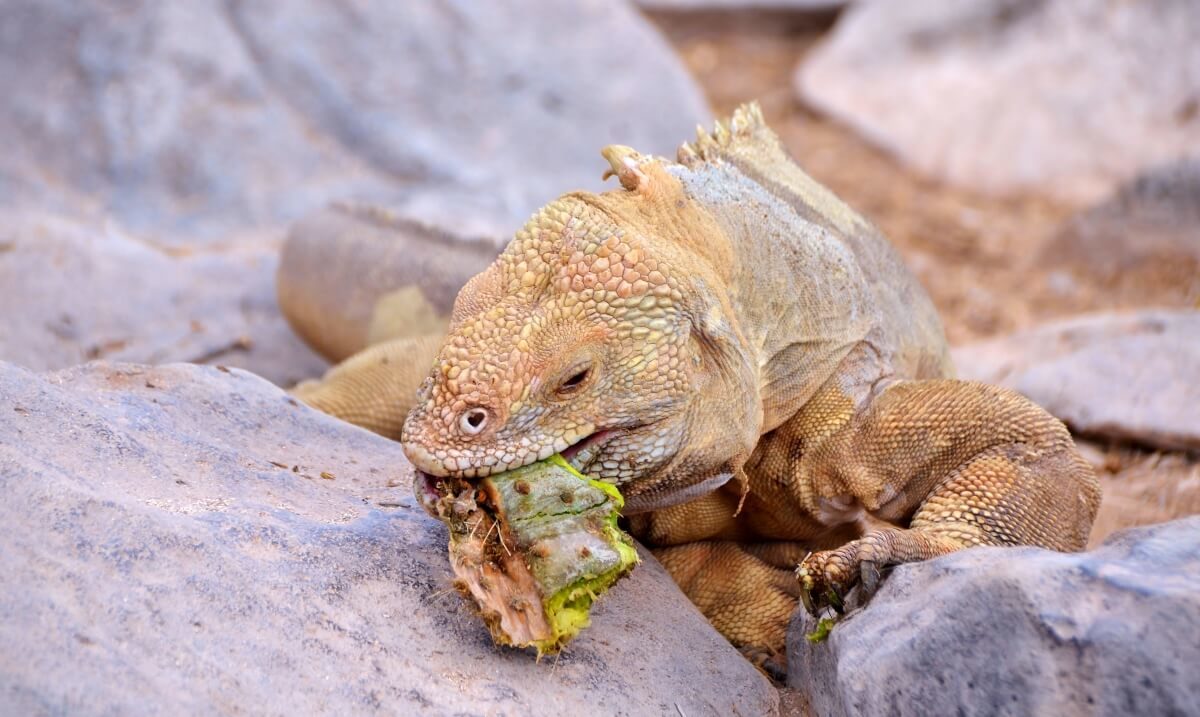 As its name indicates, the Santa Fe land iguana (Conolophus pallidus) lives only on Santa Fe, a small island southeast of Santa Cruz. It’s one of the three endemic land iguana species on the Galapagos. According to research on this particular species, its populations on Santa Fe are stable, but the CITES – (the Convention on International Trade in Endangered Species) lists it as “vulnerable.” Fully grown, this land iguana species has no natural predators, although Galápagos hawks (Buteo galapagoensis) may feed on juveniles and even young adults. Visitors can see Santa Fe land iguanas trying to warm up or cool off on a rock, in the shade of the typical Santa Fe giant Opuntia cactus or simply in the middle of the visitor site’s hiking trail. When freshly hatched, these iguanas base their diet on insects and other arthropods, but while they grow, they become mostly herbivorous. Adults love the Opuntia fruit and leaves; it’s amazing to watch them remove the big spines of the fruit, called tuna, by scratching it lightly on the ground and then eating it, disregarding the remaining small spines.

This cactus provides the majority of the nutrients and water these iguanas need to survive in this arid land. They complement their diet with insects, arthropods, and even carrion. Females pick holes in the grounds to nest and can deposit between two and 25 eggs, but just 10% of the hatchlings reach maturity.

Santa Fe land iguanas have an interesting symbiotic relationship with Darwins’ finches and Galápagos mockingbirds. When iguanas lift their feet, they allow these birds to remove ticks and other parasites that they can have on their scaly species. This is one of those species that make the Galápagos special and a living witness to the marvels of specialization.

We have designed a complete program that will allow you to observe Galapagos Islands’ wildlife. Or, you can also  customize your own travel package. Get in touch, you are in good hands.

previousWhy are we Eco?